As if with the name given to him, the desire to walk the hardest road, has been imparted in him – the road to himself and to discover his real “self”. Mehdi. This is the name his parents named him with when he came into this world. Translated from Farsi it means “led in the right road”. Mehdi is from Iran. His fate as a refugee has put us on the same path. Two years already he is in Bulgaria but his application to get the refugee status has not been approved. In spite of all difficulties and disappointments he has been through that time Mehdi lets me into his inner world and starts untwisting the tangled thread of his story. Even though he speaks not bad Bulgarian, he prefers to tell his story in his native Persian language. And it sounds like a song, at times said, at times full of dreams and hopes.

Until his 33 year Mehdi has never been out of Iran. And perhaps his life would keep going in the same stream if he hasn’t been forced to run. The reason: “I did not agree with the things taking place in the country. I’ve been seeing what kind of thefts and frauds were taking place. There was a lot of unrest during which my fellow countrymen, opponents to the government were arrested and killed”, he says. In the country of Mehdi, more than 25 years, the absolute power is in the hands of Aytollah Ali Khamenei, who has subjugated under his control all the state media, the legislative, the judiciary and the executive power. He is also the supreme commander-in-chief of all the subdivisions of the armed forces in the Islamic republic, including the police and the Iranian revolutionary guards. The Guards has been defined as a gigantic and constantly developing structure which runs its own intelligence agency, owns plants and factories, banks and companies for import-export. The revenues from all of them have been used for implementation of the political program of the supreme leader Khamenei.

“Prior to my escape, I blew up some cars and started fire at a macaroni factory. I knew it was owned by this organization and that through it they also make money. That’s why I wanted to cause damage to them. They failed to raise charges against me but they battered me to death and broke my leg. I realized my place is not in Iran and if I stay there they will make me disappear of kill me. That’s why I decided to run away even though my leg was broken”.

On the go Mehdi is forced to separate with his loved ones. In Iran he leaves his home and tailoring shop, which was providing for his living.

It all took place in 2013. A friend of his uncle took him by car to Edirne. “In the street I met a trafficker, who was ready to take me over the border between Turkey and Bulgaria. He wanted me to pay right away but I told him that I will give him the money not before we cross the frontier”, remembers Mehdi. The “pleasure” of crossing the border on foot, with broken leg, cost him 700 Turkish liras. On our territory he was caught by the police and that’s how he ended up at the refugee camp in Lyubimets. “I was taken to the doctor who examined me and found that my leg was broken but did not put cast on it. I said nothing because I knew that I am in a foreign country and had no expectation to do whatsoever for me. I just thanked God that I am alive and away from the place where my life was under a threat”, tells Mehdi. He decided to treat his leg by himself using old remedies and to tighten it with a scarf made out of ship wool. After 18 days of layover he has been moved to Busmantsi.

At the camp in Busmantsi Mehdi meets a fellow countryman who is Christian. “I had already heard about Christianity from an Armenian friend of mine in Iran, who had the Gospel of John and he had given it to me to read it. That’s why I asked my new friend to give me the New Testament. I asked him how could I become a Christian and he said that when I get out of the camp I could be baptized in water. I really wanted to do that but there was no way at this time. I stayed in Busmantsi for 40 days. It was time when I was able to read and to learn more about the New Testament”, tells Mehdi. While in the camp, he gets to meet Ali Dini who is part of the team of Mission Salvation Foundation and works with refugees. “Very difficult and with lots of money spent we got out of Busmantsi. One of my friends had a green card and he rented a place to stay. You can leave the camp when you can prove to have an address registration”, explains Mehdi. This is how he is out in the freedom but not quite. However the young man knows another, real freedom which only the faith in Christ can give it to him. He shares that in Christianity he discovers: “A Father, whom I can rely on. He gives me peace and he knows what’s going on in me”.

Mehdi appeals with the court the refusal of the State Agency for refugees to give him the status. He is five minutes late and this sets the course of his fate. “I didn’t get the chance to defend myself”, he shares bitterly and adds: “At the refugee’s agency there was a translator who would always say that the Iranians are not going to get the status. I thought he simply doesn’t like us and that’s why he speaks in such a way. But there was also a lower there who also claimed that status is given only to the Syrians. And really in Syria they’ve got some serious issues but they shouldn’t separate the people as Syrians and Iranians. They have to find out if the particular person really has issues or not.” Mehdi has decided to take his chances in Germany. However, this brings him back to the fate of a refugee and an illegal immigrant.

In Bulgaria Mehdi meets the love of his life. Her name is Tsveti. Their first meeting is at a birthday party. “At that time we just met and had no long conversations. Nevertheless, I liked her and she got into my heart”, tells the young Iranian. He believes that she is an answer to his prayers for family, for a person who he can share his life with. In regards to the love and the native habitudes for courting Mehdi is inquiring with Iliana, the wife of his friend Ali Djafari. “I asked her if I can meet with Tsveti and how things are done in Bulgaria. She advised me to do it like a Christian but I did not know what a Christian does in such a situation. Then she told me that I should first start praying and if the Lord has prepared her for me, He will speak to her also and our love will be mutual. I started to speak to the Lord: “Lord, if she is for me, let it happen quickly because I lack patience.” – Mehdi is laughing and adds – “I am a person who wants quick result. I have prayed a lot for Tsveti, I have asked for her a lot. I believe in what the Word says: “Ask and it shell bi given unto you, knock and it will be open”. That’s why I believed that the Lord will answer me and He did.” And truly, Tsveti has accepted him to such an extent that she is ready to follow him and to share his life of an immigrant. “However, as a head of the family, I need to come up with something better. I went through all of this and I know how hard it is to be an immigrant and I don’t want to put her through such life”, shares Mehdi. 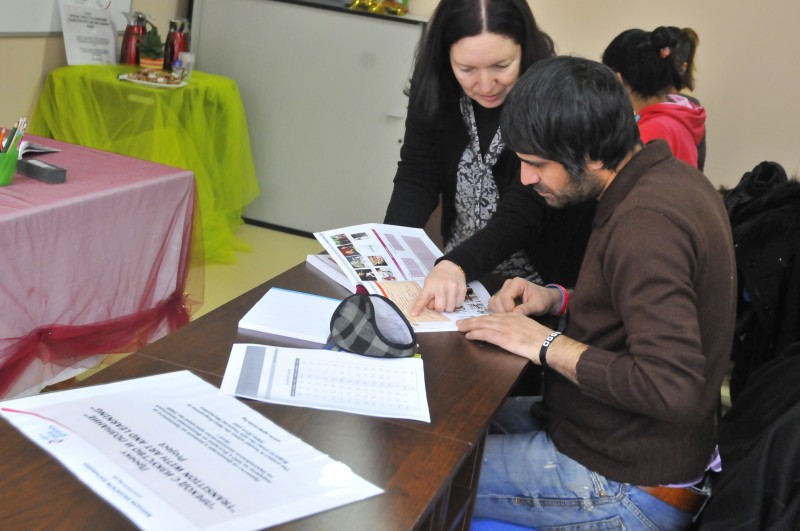 When I am in a strange country and there is no one to count on, the best that can happen is to find someone’s stretched out arm, ready to help you. In a difficult for Mehdi time, the help comes from Mission Salvation Foundation. He is one of the refugees included in the project “Transition through art and knowledge”, funded in the framework of the program for support of NGO in Bulgaria, by the financial mechanism ЕИП 2009-2014. This gives him the possibility to participate in the activities for arts and Bulgarian language, as well as attend the course for professional training in tailoring.

Loves, God, rock… are amongst his favorite Bulgarian words. He also has a favorite sentence: “God has made a way where there seems to be no way”. He says that for the Bulgarian language Ali and his wife Iliana help him a lot, as well as Tsveti. He attends also the course organized by the foundation to master his knowledge and to receive a certificate. “I worked a lot. I gave a lot from myself, read, and exercised. Grammatically the Bulgarian and Persian languages are too far apart, like heaven and earth. That’s why it is difficult to learn. I wanted to master the language in order to communicate with people. I wanted to stay in Bulgaria, but Bulgaria doesn’t want me”, he shares with certain disappointment. He tells us as well, that in Germany the fact that an immigrant has quickly learned the language is well appreciated, and his papers for status are moved faster along the chain. “Unfortunately this is not the case in Bulgaria”, he concludes.

For his participation in the vocal group for adults, run by Angel Kovachev, Mehdi shares: “It’s been a great period of time for me because I mastered my vocal abilities. Besides, music touches my spirit and soul when I sing. This is something that I like a lot and it relieves me. Especially the praise and worship is a powerful music which you can feel with your heart.”

In Iran Mehdi had owned a tailor shop that’s why he decides to attend the professional course on tailoring. “This is my job. I have to do what I can. However, in Europe you need to be certified and if you are not you can’t achieve your dreams. I can sew but I enrolled in the course in order to master my skills and receive a document, with which one day I can start my own shop”, explains the Iranian. About the refinements he has learnt from his teacher Ali, he says: “In Iran I was sewing mostly new garments, while here I’ve learned to make corrections, because in Europe this is obviously something more looked after. Tailoring is vast like an ocean. You can’t tell that you are a tailor and there is nothing more to learn. There is always something to learn”, Mehdi concludes the conversation.